King Of the Khmer Rouge? 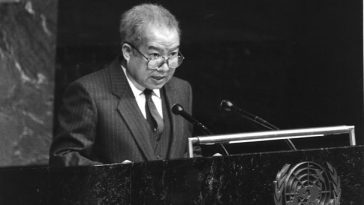 King Of the Khmer Rouge?

King Sihanouk, whilst trying to walk a middle ground had been a leading member of the Non-Aligned Movement. Ironically trying to play the neural led him into friendships with communist China and North Korea.

When was overthrown in the CIA backed coup of 1970 he was driven into the arms of the Chinese. The Chinese and to an extent the North Koreans persuaded him to enter into an alliance with Sihanouk. While we can look back at this now and see it as an unholy alliance at the time it made sense to all involved.

The Khmer Rouge had the strongest fighting force, but not the popularity. Sihanouk had no army to speak of, but was popular among the peasants. China, North Korea and the Soviet Union all wanted an ally and the overthrow of Lon Nol. Thus the was born.

Who were the GRUNK?

The GRUNK was the french acronym for the Royal Government of the national union of Kampuchea. Technically it was a coalition government headed by Sihanouk and cosmetically at least featuring prominent non-communist, or at least liberal communist members.

In reality it was hijacked and used by the Khmer Rouge as way to take power in Cambodia.

Was Sihanouk a socialist, or a useful idiot?

Whilst Sihanouk talked socialism, specifically “Buddhist Socialism”, he really did not walk the walk. History judges him in many ways, but one of his core beliefs seems to have been that he should be in power in Cambodia. Whilst undoubtedly a patriot it is hard to see that there wasn’t at least some self-interest there.

It is generally accepted that he did not have any idea of the excesses that would have occurred under the Khmer Rouge regime. In Laos a Prince had managed to become “Head of State” and the governments of Laos and Vietnam whilst socialist, were also nationalist and stable.

Sihanouk thus continued to press the cause of the GRUNK until the Khmer Rouge swept into power in April 1975.

During this period Sihanouk had been living at the vila gifted to him by North Korean President Kim Il-Sung, a man he would describe as his closest family after the death of his mother.

To read about the friendship between Sihanouk and Kim Il-Sung click here.

In July 1975 he was invited to return to Phnom Penh by the Khmer Rouge. He did this via a flight to Beijing where he met Chinese Premier Zhou Enai and sick Chairman Mao.

He was to say the following

“My decision to return to Cambodia dod not express the fact that I agree with the Khmer Rouge, but I have to sacrifice myself for the honor of His Excellency Zhou Enlai who helped Cambodia and myself so much”.

Of course no one will quite ever know what was said during these meetings, but one can assume the Chinese were to guarantee his safety. From a Chinese point of view having Sihanouk as the titular Head of State of their clients in Cambodia would at least add some kind of international legitimacy to the Khmer Rouge.

It is also suspected that the Chinese felt they could manage things in the country easier by having a friendly face in government. In essence the Chinese would control all factions.

Return to Cambodia and the Royal Government

Whilst we know the Khmer Rouge as being one of the most warped experiments in socialist governance initially at least and on the surface as the Royal Government of the National Union of Kampuchea. This had been the name of the state under the GRUNK. Officially at least Sihanouk was not only the head of this, but the head of the Capuchin state.

On his return he was allowed to chair cabinet meetings, although not speak at them. He as the quickly dispatched to the United Nations where he would claim the seat of Cambodia for the Khmer Rouge. During this period many of his supporters and indeed family members were being purged and killed.

in December of 1976 a constitution was proclaimed. It had 250 members, with seats allocated to various revolutionary forces from peasants to the army. It stipulated a Head of State, one without any real powers that initially at least was to be Sihanouk. Thus giving him another in his long list of historical Cambodian titles.

In January 1977 the constitution was officially adopted and the country changed its name to Democratic Kampuchea. Any links to royalism had officially been dropped. Again as weird as it may seem to have had a king in charge of a communist state a precedent had been set in Laos.

After touring the country Sihanouk allegedly became angry about the situation of his country. Whether this was the case, or whether he was more angry at being marginalized from power is open to debate.

He was to eventually resign as Head of State. The Khmer Rouge were initially very reluctant to accept the resignation and various options, such as killing him were discussed. It is likely that his close ties to both China and North Korea were what kept him alive.

To read about why the Khmer Rouge did not kill Sihanouk click here.

He was to be kept under house arrest at the Royal Palace living quite the days life until just before the fall of Phnom Penh in January 1979. Ironically these few years were to resemble the last Emperor of China Pu Yi to some extent.

Was Sihanouk King of the Khmer Rouge?

For 5 years Sihanouk led the GRUNK and was the head of state of this government in exile. It is generally accepted that the Khmer Rouge could not have won without his support.

For 9 months the Khmer Rouge called themselves the “Royal Government” and for 4-5 months Sihanouk was the head of State of Democratic Kampuchea. Thus whilst he might not have always agreed with the Khmer Rouge he was unquestionably their most important ally for a lot of this time.

Were this to be the end of things you could perhaps chalk it down to misadventure, but of course it was not.

King of the Khmer Rouge take 2

After the Khmer rOuge were overthrown they were replaced by the Vietnamese backed Peoples Republic of Kampuchea. This was opposed by both the Khmer Rouge and the party and army of Sihanouk (FUNCIPEC) on predominately nationalist grounds.

This led Sihanouk to again form an alliance with the Khmer Rouge in 1982 as the Coalition Government of Democratic Kampuchea.

You can read more about the Coalition Government of Democratic Kampuchea here.

There has been fierce debate as to why he did this, although he was eventually persuaded by the Chinese as the Khmer Rouge had by far the strongest fighting force. Did he feel he would do better this time, or was it mere hunger for power? This question si probably best answered by what was to follow later.

Without doubt though and until the elections of 1993, Sihanouk was the de-facto King of the Khmer Rouge.

The last act of Sihanouk was not only a somewhat strange one, but has essentially shaped the current political climate in Cambodia.

Sihanouk had stepped down as leader of FUNCIPEC, which was now led y his son. Keep that in mind for a bit. He was not yet officially head of state, but was looked at as head of state. FUNCIPEC won the elections of 1993.

The Cambodian Peoples Party, the successor to the Kampuchea Peoples Revolutionary Party disputed the election results. Another son of Sihanouk Norodom Chakrapong who had only 9 months before defected to the government. was another to protest. He threatened to secede from Cambodia with 7 provinces due to election “irregularities”. With the Khmer Rouge already running the “Coalition Government of Democratic Kampuchea” this would have left a rump Cambodian state, with the nation split into three entities.

The CPP essentially asked Sihanouk to take executive control over the country, which he gratefully did. He then suggested a power sharing agreement between the CPP and the Royalists of his son. There has been no change in government since.

Sihanouk though did retain the throne, remaining head of state until his death. Whether he acted rightly, or wrongly during the whole affair, perhaps the ends justified the means, particularly if all he ever wanted was the power.

Being King of the Khmer Rouge was thus a necessary evil for him.